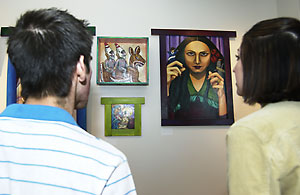 Students inspect some of Maya Gonzalez’ paintings at the
MultiCultural Center exhibition on Thursday.

Gonzalez’s art was shown at an open house Thursday and will be on display at the University Art Museum through Mar. 12. The majority of the 11 paintings discussed during her lecture at the MCC reflected Gonzalez’ childhood and her sexual, emotional and social experiences.

She began her lecture with her most well-known painting, “Pomegranate,” which features a woman sitting in black lingerie holding a dripping pomegranate in one hand and a skeleton in the other. Gonzalez said despite some feminists’ critiques that the woman’s posture and dress suggest a masculine version of female sexuality, the painting’s subject is in actuality asserting her own sexual independence.

“We need to respect one another’s sexual power however it manifests and let it have its full beauty and respect that femininity in all of its parts is a beautiful thing,” Gonzalez said.

“La Mula” is a visual description of growing up racially mixed, Gonzalez said. The painting depicts a girl dressed in bright yellow standing erect atop a mule. Gonzalez, whose mother is white and whose father is Mexican, said that as a little girl she was constantly called “mulatto” but did not know the meaning of the word.

“Girlhood with Snake” features a young girl standing in front of a large bed wearing a short blue dress with a picture of a snake. The snake’s tongue points to the girl’s face, while the outstretched tail points to her vagina. Gonzalez said the painting is an illustration of herself in her favorite childhood dress, and that it also reflects the girl who would grow into the woman featured in “Pomegranate.” The window in the background provides a view of Lancaster, Calif., where Gonzalez grew up.

Gonzalez said her move from California to Oregon at a young age proved to be a culture shock. In an area of mostly white residents she was called things like “exotic,” which inspired her to express herself first as a writer, and later as an artist, she said.

Gonzalez received no formal art training, a fact that impressed some in attendance.

Senior anthropology major and women’s studies minor Isabel Millan said she was impressed by the artist’s connection to her work.

“I think she is very personal about her work,” she said. “I really like the way she was very specific in her descriptions but nonetheless was able to convey the meaning she put into her work.”

Gonzalez has been the author and illustrator of 17 children’s books. One of these, entitled Prietita and the Ghost Woman, includes a retelling of the classic Mexican folktale known as “La Llorona.” Though versions of the story vary slightly, it consists of a woman who drowned her children and then herself, causing her ghost to wander nightly and wail for her lost children.

Gonzalez said that, due to health problems, her art style has changed from bright paintings to mostly black and white ink drawings. She said her paintings require tremendous energy, which she is now incapable of.

“All the color has washed out of my work,” Gonzalez said, adding that she would focus her energy on children’s books from now on.

The lecture was co-sponsored by several groups, including the MultiCultural Center, the Dept. of Chicana and Chicano Studies and the University Art Museum. 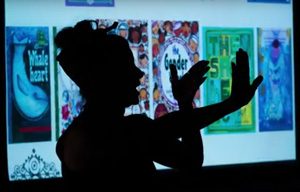