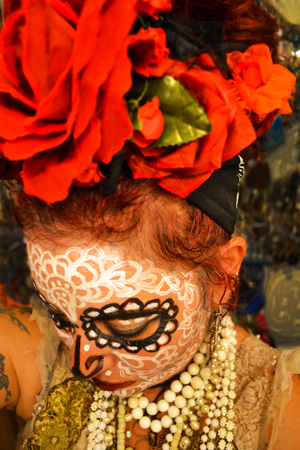 Maya Gonzalez is largely self-taught. Her first one woman show was in Oregon in 1988. She moved to San Francisco in 1994 with the sole intent of painting full time. Her first San Francisco show was a small one woman show for Dias de los Muertos at Galleria de la Raza in 1994. The show nearly sold out. This also began her long collaboration with Children’s Book Press illustrating multicultural children’s books. Her work has been consistently shown in San Francisco and the US and is on the cover of Living Chicana Theory and Contemporary Chicana and Chicano Art: Artists, Works, Culture and Education considered to be “the Bible of Chicano/a art.”

Gathering the Ghosts 1964-1984:
Maya was born in 1964 in Lancaster, CA in the Mojave Desert to a Mexican American father and a mother of German/European descent. Her father worked as a lineman for the electric company and her mother as a homemaker. She has a brother who is a year younger.

Maya’s early years were complicated with intense emotional instability in the family. However, in the children’s book, Just Like Me, Maya recounts how at age 5, in the middle of the night, she saw a bright light in the corner of her room; a light so bright, it woke up her brother across the hall. This illumination brought the multidimensionality of reality into Maya’s awareness and still serves as a deep and constant frame for all of her work. During this time, Maya also began to affirm her existence and make a space for herself through drawing herself in the backs of books and seeing herself in nature.

At age 7 she had an accident, resulting in a serious head injury and was in a coma for 3 days. The following 2 years was a time of heavy medication to prevent more seizures. It was during this time that Maya was gifted with “real art materials” by a friend of the family and later enrolled in art classes at the local craft store to support recovery. Maya learned that art heals.

Deeply Catholic during this time, Maya was heavily influenced by Michelangelo and practiced art through drawing images from the family bible. This taught her that art can portray multidimensional reality and altered states of awareness.
At age 13 Maya’s family moved to Cottage Grove, Oregon and lived in a house in the woods. This firmed Maya’s intense love of nature. 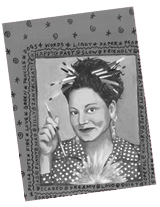 After a childhood of committing to be an artist, Maya firmly decided to stop making art. Deeply affected by Emily Dickenson’s poetry, she felt that art would take over her life if she pursued it and began writing poetry. She studied creative writing through high school, community college, and then the University of Oregon. Her artistic direction appeared to be heading towards being a poet and professor. Upon arriving at the U of O she was invited to attend graduate creative writing classes. However, Maya found the department’s culture and educational style very white, male, and straight, and the use of language highly exclusive and hierarchical. This seriously challenged Maya in her commitment to this line of creativity as she became increasingly aware of people who couldn’t read or write and the limitations of the written word. Writing in this context automatically rendered her work inaccessible to a vast part of her community.

Maya’s political awareness deepened during this time as she did a lot of political work for women and the LGBT community. Maya came out as a part of the LGBTQ community at age 20 and by 21 was disowned by her family.

One term away from finishing her undergrad work and going into the graduate creative program for her Masters, Maya took a women’s art history course as a favor with a friend and, as she had anticipated, art took over her life. Turning again toward art made sense to Maya. She felt that unlike writing, if someone had eyes to see, her work was accessible. Creativity had always been a way for Maya to more deeply understand herself and her experience. And negotiating family dynamics as she entered the bigger world through the written word was proving to be overwhelming. Art, provided greater accessibility to her community, while creating a more emotionally and psychologically contained space for Maya. She could be less explicit in her imagery to more deeply code her experience. She began painting.

She took a few terms of art courses then lost her funding and decided it was best to walk away from school altogether, as she found the art department also very white, male and straight. In class someone said she reminded them of the then marginal and unknown work of Frida Kahlo. So Maya branched out and began studying art independently based on her own internal guidance. This included Diego Rivera, Frida Kahlo, Indian art, religious art from colonial Mexico, gothic art, women’s art, Mesoamerican art, ancient and indigenous spiritual art and more.
Back to Top

Based on the philosophy that the “personal is political” Maya bought art supplies from dime stores not art stores, consciously choosing to focus on common, accessible materials and venues. Her work was deeply personal, exploratory, cathartic, and as in childhood, was used to affirm her existence. Everything was self-portraiture.

Maya found the work of Jane Roberts’ Seth material and began a lifelong, in-depth study of the nature of reality, consciousness and how these relate to creativity. Art evolved into a spiritual practice of allowing the image to slowly integrate and rise from a deep internal place and then become external through surrendering to the creative process of manifestation. Each step providing the practice of being present and open to allow the universal creative force freedom to express through her physical form. Paintings and drawings are seen as passing mileposts along the journey. The images that are by products of the creative process become teachers from the soul; their lessons unfold over time. It sometimes takes years before Maya fully understands what her paintings are telling her.

During this same time, Maya briefly taught classes for children and adults called Fearless Art, exploring her developing philosophy about creativity in 1989. She primarily supported herself as a craftsperson making handmade jewelry.

In 1993 Maya took a 6-week long road trip through California, Arizona and New Mexico, with the initial intent of moving to New Mexico. In the Southwest, she saw art by Latinos and Native Americans for the first time. This greatly expanded Maya’s consciousness to what was possible for her as a woman, Chicana, queer artist. She decided to put away her dime store wares and started painting in acrylics. She closed her small jewelry business and moved to San Francisco to paint full time.
Back to Top     |    View Artwork from this time period

In January 1994, Maya moved to a neighborhood between the predominantly Latino Mission District and the historically gay Castro district in San Francisco. After experiencing years of racism and homophobia, Maya was deeply moved by the effect of seeing herself respectfully and genuinely reflected in her surroundings. 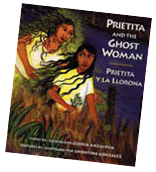 By the fall Maya had a small show of paintings at Galleria de la Raza’s annex Studio 24 for Dias de los Muertos. The show almost sold out and served to introduce her to Harriet Rohmer, the founder of Children’s Book Press who bought a piece and invited her to make art for a book by Gloria Anzuldua. Maya painted full time now which included making art for children’s books and going into Bay Area schools to talk to kids about her books and being an artist.

In 1996 Maya became sick through a negligent screen printing incident for the print The Pomegranate. Although unknown at the time, this resulted in heavy metal poisoning which was to dramatically change her health and her life for the next 10 years. She also traveled out of the country for the first time this year, spending a highly significant month in India. There, Maya entered a heightened state of bliss and had numerous psychic experiences, including her communication with the river Ganges during her stay in the sacred city, Varanasi.

In 2002, Maya’s piece, The Love that Stains was published on the cover of Contemporary Chicana and Chicano Art, a large two volume retrospective on the art movement, considered by many to be “the Bible of Chicano/a art.” Her work continued to be featured in art books and written about in scholarly texts.

She traveled to Mexico, Puerto Rico and Brazil during these years, her journey to Brazil being a sacred pilgrimage to work with the plant teacher, Ayauasca.
Back to Top     |    View Artwork from this time period

In 2003 Maya’s already unstable health situation began to deteriorate rapidly. It was the plant teacher, Ayauasca who helped illuminate what was mysteriously making her sick. Tests were taken and 9 different western doctors said she should have been dead with such high levels of heavy metals. For 3 years she was deemed too weak for the treatment to remove them. During this time, she became one of four co-parents to her daughter Zai, followed by divorce from a very difficult 17 year relationship.

Temporarily unable to stand and put in the long hours of painting, Maya’s work became increasingly small and her materials easier to handle. In 2005, Maya finally began working with a very unique healer in southern California. After being housebound, in constant pain and dwindling down to 94 pounds, Maya’s health miraculously changed in a very short time. The effects of the heavy metals seemed to be removed.

A part-time parent, healthy after 10 years and finally in a happy and loving relationship, Maya sought to express her gratitude and experience through art. Receiving a grant from the San Francisco Arts Commission, Maya began the series, Healing Through, which was completed and shown in 2008/09.

In 2007, Maya wrote her first children’s book, My Colors, My World which went on to win the 2008 Pura Belpré Honor Award.
Back to Top     |    View Artwork from this time period 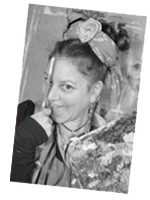 After her own experience as a child, working with hundreds of children from disenfranchised communities and knowing her daughter, Zai, Maya co-founded Reflection Press with her partner, Matthew, in 2009. The Press served as a foundation to help disseminate what Maya had learned, and had been teaching, about the creative process and its power in supporting children. The press’ original motto: A People Should Not Long for Their Own Image, is a haunting quote from an anonymous graffiti artist Maya saw years ago in the Mission District of San Francisco.

Their first book was Claiming Face: Self-Empowerment through Self-Portraiture, a teacher’s guide published in 2010. It is based on the curriculum Maya developed going into schools, libraries and community centers since 1996 and explores her philosophy about creativity, how to bring it into the classroom as a tool to empower students of color and how to connect it to literacy. Their second book, written and illustrated by Maya is the Gender Now Coloring Book, a resource to support parents and young children to better understand gender expression.

Writing with the purpose of supporting children and social justice served as a way to integrate the written word back in as one of Maya’s creative expressions. Maya’s style and art materials had changed dramatically through her illness. Large studio paintings or pastels were few and far between. Maya’s art work remained predominantly small paper pieces in pen to accommodate her focus on writing at home.

With Claiming Face and Gender Now out in 2010, Maya has begun to include studio paintings again, returning to the longer, deeper, spiritual journey of painting large.

Maya continues to paint, write and teach in San Francisco, happier and stronger than she ever thought possible!
Back to Top     |    View Artwork from this time period