i am forever gathering articles and references like this and realized i could begin collecting them through my blog. this way i have not only a place where i can go for my own bits, but i can share them and reference them easily for others. here goes!

“John Matteson, Distinguished Professor of English at John Jay College of Criminal Justice in New York City, believes that the violence exhibited today is contextually linked to slavery and has become part of the culture over time.”

“To Matteson, there is a distinct parallel between the passing of unjust laws and the way society expresses those laws through behavior over time. “In our current day … we understand intellectually that equality is important, that equality is also basically true, but … among some people, at least, their emotions and the things that they feel in their gut when they’re going on adrenaline and impulse are very different from the things that their reason and our laws would be telling them,” he said. “So we’re talking about … someone like the police officer in Ferguson who guns down an unarmed man in this sort of visceral recurrence of this idea of Justice Taney’s that a black person has no rights that a white man is bound to respect.” “

the journalist, breanna edwards  writes an excellent article (i didn’t want it to end) AND THEN i found that i could take a free class with john matteson. so i am.

i don’t often take classes. i generally study and research on my own, gathering a broad and inclusive perspective on the development of the power dynamics in our current culture through my own study of history and consciousness from a diverse pool of folks. but matteson says:

“[I want to] encourage people to think broadly about the connections between past and present, to realize that the things we experience today did not just start yesterday … they go back 150 years. And the things that were happening 150 years ago go back much, much farther than that. So I hope for students to come away with a sense of the continuity of history, with the complexity of history.”

he’s singing my song. so i am hoping that in one place i can benefit from someone (within the system) doing a great deal of research on law and literature that i may not have done. i am willing to learn from anyone and everyone. i’m also curious  if he makes any suggestion toward effective action from his perspective.

my own frame is children’s books. amazingly this class coincides with my HEART OF IT/CREATING CHILDREN’S BOOKS THAT MATTER course, which is focusing on African American children’s literature this time for our community spotlights and book reviews.

i look forward to steeping myself in some deep learning, some deep teaching and i know this is going to inform a number of stories i’m working on right now and my recent project kidlitequality with zetta elliott. #blackyouthmatter #kidlitequality 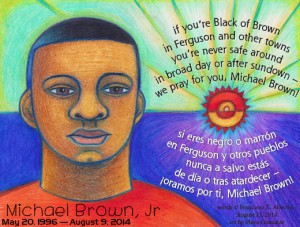 life is the revolution

check out the full article: From Slavery to Ferguson: America’s History of Violence Toward Blacks

or join me in the class: Literature and Law of American Slavery