Pronouns are one of the first ways that small children are taught to gender themselves and others.

As a child grows within the womb, they are introduced to our language and how we communicate in our world, including how they are spoken about. At first glance this can seem simple and straightforward. But if we want to understand what we’re actually teaching our kids, we have to take a closer look at our language.

Language is a cultural carrier. It evolves through multiple layers of our larger history, and ultimately speaks for those who control that history.

Sometimes what language conveys culturally is explicit, sometimes it’s more subtle. But generally it conveys in one way or another, what the dominant culture values and wants the common populous to believe.

Here are two examples from our culture. The first is the use of he and man for third person neutral, especially in academic and professional writing. Although this has fallen out of favor in the last two decades, it is still considered correct.

A more subtle and common example is the standard use of the phrase boys and girls, when referring to all children.

What values are embedded in these examples?

In the first one, it is obvious that we live in a patriarchy. Everything is seen and defined through the lens of man. This serves to center, focus and prioritize everything male. Simultaneously, this serves to erase, devalue, even make subservient anything that is not man or man-related.

An important step toward equity for all people has been seeing through this particular legacy of language control.

Connected to this, but more subtle is the second example. It basically conveys that small children are required to align and define themselves with one of two genders assigned to them at birth. This erases the reality that there are more than two kinds of bodies, and that there is more than one way to feel and behave within those bodies.

Sometimes these kinds of value judgments can be hard to see until someone points them out. But they have very real intentions and effects.

We have only to look to the long struggle of women coming out of the shadow of MAN, in relation to education, voting, health care, economic opportunity, physical security, political presence and so on. Although there is still far to go, our language reflects this ongoing evolution of independence with the shifting use of Miss and Mrs. to Ms. and the fact that he and man are no longer favored for 3rd person.

With this in mind, a closer look at language acquisition can show what we may be unconsciously passing on to our kids, especially about gender.

Here are some of the general trends in learning environments.

For kids, parents and family who can’t perform in accordance with cultural stereotypes, there are literally no words. In terms of standard language use, they do not exist. It should come as no surprise that these are the kids and adults who are the most marginalized and outright bullied in a patriarchal culture. This is profoundly compounded by racism.

It does more than use language to erase people, it conveys on a deep cultural level a complete lack of value. And herein lies the rub. Everything we say to, or in front of our children is teaching them not only about who they can be, but what we value about who they can be.

Language is power. It can be used to define, affirm, even create, or erase value.

What do we want to pass on to our kids? How can we use our language in a way that values and includes everyone?

The more we become aware of the words that have been put into our mouths and what they’re really saying, the more we can consciously create change from our own hearts and minds. This assures that the power of our voice is ours and serves us, and our kids.

Here are 5 important things you can do with your voice right now: 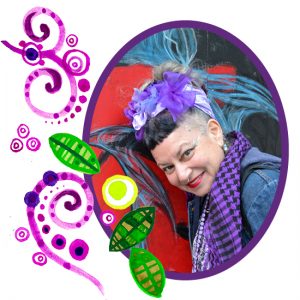 Maya Gonzalez is a Chicanx, queer femme artist, progressive educator and award-winning children’s book illustrator and author. Her work addresses systemic inequity in relation to race/ethnicity, sexism and cissexism using children’s books as radical agents of change and healing, both personally and culturally. With her partner Matthew, she co-founded Reflection Press, a POC, queer and trans owned independent publishing house that uses holistic, nature-based, and anti-oppression frameworks in their books and materials for kids and grown-ups. She is also the creator of the Gender Wheel, a tool to express the dynamic, infinite and inclusive reality of gender, and provides lectures and workshops to educators, parents and caregivers. www.mayagonzalez.com | www.genderwheel.com | www.reflectionpress.com