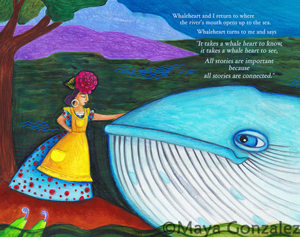 I’ll never forget it.
In February of last year I had this wild idea that I thought just might work….

It was at that critical mass moment right before the diversity conversation exploded in the children’s book world with assistance from the #WeNeedDiverseBooks campaign later that summer.

Right around this time I was also in the process of putting together my first ever children’s book course that I had been dreaming about for some time, The Heart of It: Creating Children’s Books that Matter. The course grew out of a desire to pass on the knowledge I had gained of making children’s books for the last 20 years, and not just the physical process but the heart and powerful healing piece too. I wanted to support my communities to reclaim their birthright as the storytellers and artists I know they are. I also personally wanted to hear their voices and see their imagery!

In the midst of creating the mass amounts of materials for the course, I came across a book on the internet The Tiny Book of Tiny Stories created by Joseph Gordon-Levitt.
And it hit me…

What if instead of just teaching people what I had learned about making children’s books, I took it a step further and provided a platform to actually start publishing people?

I already had an independent press, Matthew and I knew how to publish books using the latest print-on-demand technology, we already had a stash of ISBNs. It just might work!

The initial idea:
to use Reflection Press, the independent press I co-founded with Matthew to publish anthologies of student work.

As that first class ended in May 2014, the idea took root as 23 ArtistAuthors joined me on the adventure. Just like working with a traditional press, we went through the process from manuscript to thumbs to final art to produce one spread each for the upcoming anthology that we hoped to release around December of 2014. Ha!

Little did I know exactly what we were getting into because as the work of those 23 ArtistAuthors gathered, a story emerged. And that simple anthology idea turned into a re-visioned format complete with a night journey, storyfish, and a ship of storytellers! I found myself compelled to create an entire book around the beautiful work that was being submitted!

Matthew and I had never done a print-on-demand full color children’s book before, our experience was mainly with traditionally published children’s books and predominately black and white for print-on-demand. The whole process took a lot longer than expected, especially on a teeny weeny shoe-string budget and stealing time away in between taking care of a growing rambunctious 1 year old (now 2!) and our other work to pay the bills. And probably also because we really wanted to present this first one as gorgeous as we could while maintaining a grass roots, easily accessible, affordable way for anyone to publish books!

And NOW here we are! We’ve got our final proof and we’re gearing up to release Whaleheart out into the big wide world!

…and such is the story of Whaleheart… 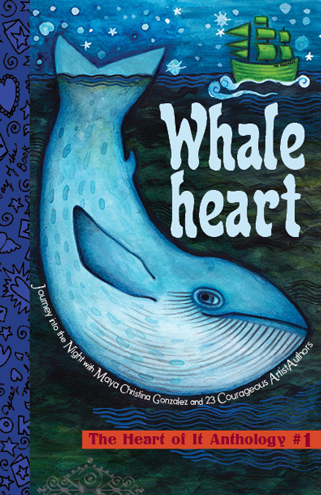 Releasing into the Night…
This August.

“By the light of the moon, the storyteller stands in the river and gathers what the storyfish bring her, but the wind promises something more….”

and I guess I should also mention that….

The Heart of It Anthology #2 is already in the works to be released in 2016!
with over 20 MORE new and emerging ArtistAuthors!!

The Revolution is Always Now.